Benefit Party on the Zeedijk October, 2007

Primary School from Hauwert in action

Around Valentine's Day Cafe de Engel on the Zeedijk organized a promotion for Willen & Doen. They had hung the entire ceiling with hearts. The proceeds were € 650.

Queen's Day was another big success. Proceeds were € 2.200

Collections on the gay pride and the heart days.

On Queen's Day the first performance of the Nuns / Queer leaders at the Rapido festival. Pink Monday in Haarlem, after which they also performed the gay pride and heart days.

Presentations at MBO and HBO schools, in men's and women's clubs.

The performances of the Nuns are on all holidays. Performance in Paradiso on Love Dance.

HBO interns organize benefit, which is presented by Peter Faber and where Martin Spee also performs.

Presentation at Broeckland college in Breukelen. Also presentations at Women of Now.

The performances of the Nuns are on all holidays, at Kwakoe festival and at the volleyball tournament party in hotel Krasnapolski.

HBO interns organize a benefit party at the Barlaeus Gymnasium in Amsterdam.

Presentations for the classes with the trainees. MBO West project. Benefit on world aids day.

MBO West benefit, followed by Brunchen between the Tulips and Benefit party in Hauwert. Sponsorship of Sjef Commandeur Foundation. 40MM Mars. Sponsorship of the Obonto foundation for a new kitchen on the Mawotsheni project.

The Nuns perform again, on public holidays and Kwakoe festival.

Private contributions from Switzerland, by companies and wedding and anniversary parties.

Jubilee benefit party in Hauwert on 24 of June.

The back home party in Hauwert with the cooperation of "The Chef and his Bitch". Mayor Noorder Koggenland was present and gave a speech in favor of Willen and Doen.

Hearts Day 2008/2009; campaign on the Zeedijk. Collecting, informing about what we do and selling hearts and ribbons.

Valentine's Day 2009, selling hearts and roses in the bars on the Zeedijk (roses from…)

Gaypride 2009. promotion on the Zeedijk.

Presentation Baptist church in Amsterdam with the cooperation of Stephan Sanders and Arie Boomsma.

Thonie Theel from Noordeinde held a curiosities market on its own site for Foundation Willen & Doen. The proceeds will be transferred to this foundation, which makes an important contribution to the fight against AIDS in South Africa. Together with her husband Peter, she received interested people Friday and Saturday in her beautiful garden in Noordeinde. . .

Oosterpark promotion in Amsterdam based on Ida and neighborhood center de Werf..

Ladies society in The Hague.

Teaching about life in South Africa, a presentation with image and sound.

How do children grow up in the Transkei? What is the difference between HIV and Aids, what are sexually transmitted diseases and how does this affect their lives, what is a healthy life, why is sport important, what do they eat and why is education so important? What are they playing with and what is it like to live without electricity and water?

These are topics that were discussed with the students. In three days Wil Groot presented 20 classes of VMBO students, all of whom listened attentively and kept asking questions. After the lesson many students immediately took action, collected and sold hearts for Willen and Doen. At home she told about what they had learned and many parents visited the Christmas market that was organized at the school on December 18th. Proceeds 2500 euros.

With this revenue, solar energy is installed on the Mawotsheni project, among other things.

Wil Groot (on the right) shows a check of € 45,000 that he will use for the Foundation Willen & Doen. Groot has a children's home built in South Africa. The money was brought together by the Zaans Offensive. 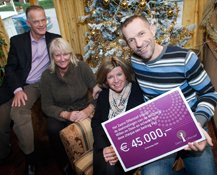 Queen's day  was another big sucess. 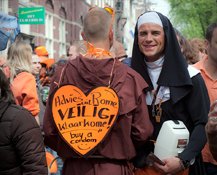 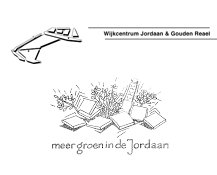 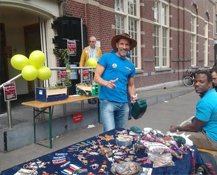 Foundation Willen & Doen gives workshops at MBO West in Amsterdam. Education, sexuality, culture, South Africa / the Netherlands. We get to work together. Our goal is a children's daycare center with vegetable garden for 70 children. Support Us in it :) 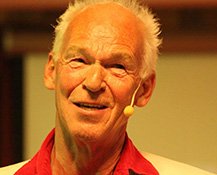 CYCLING AROUND THE IJSSELMEER 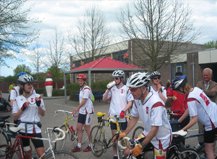 Thonie Theel from Noordeinde held a curiosity market on its own site for Stichting Willen en Doen. Together with her husband Peter, she received interested people Friday and Saturday in her beautiful garden in Noordeinde. 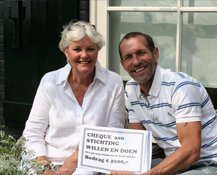 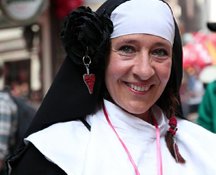 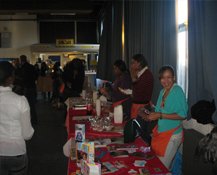 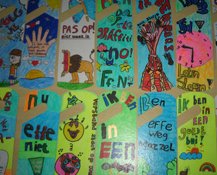 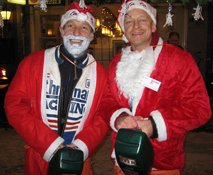